25 Novices Made First Vows To Sisterhood at Ngetta 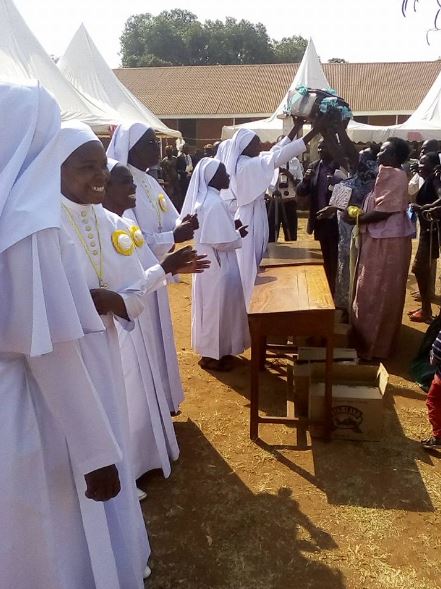 Mimissionary Sisters Of Mary Mother Of The Church At The Function In Ngetta.

Thousands of Christian Congregation on Monday thronged at Ngetta Convent for the Missionary Sisters of Mary Mother of the Church’s January 1st Anniversary Day.

The annual event that is always climaxed with the profession of religious novitiates to Sisterhood and renewal of vows presided over by His Lordship Rt. Rev. Joseph Franzelli, the Bishop of Lira Diocese.

The Christians, who came from different Dioceses in Uganda, were joined by those from the Catholic Diocese of Meru in Kenya.

During the religious right, Bishop Joseph Franzelli said, that the event was a sign of God’s love for the People and the Church at large.

He called on the newly avowed Sisters to remain faithful to their vocation and the mission of the Church they have been called to embrace.

He emphatically stressed to the newly professed Sisters the importance to remain united if they are to succeed in the ministry of the Church. Among them were the five Sisters who celebrated their Silver Jubilee and also renewed their vows of commitment.

Earlier on Sunday 31 December, a group of 25 Novices made their first vows to the religious life during a ceremony presided over by the Bishop of Lira, Rt. Rev. Joseph Franzelli.

The Congregation of the Missionary Sisters of Mary Mother of the Church was founded by the first Bishop of Lira Diocese Bishop Ceaser Asilli in 1974.