Alebtong Leaders Get Down On Road Rehabilitation 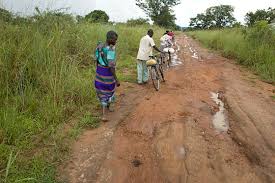 Alebtong district has embarked on rehabilitating Abako to Opunu market road which has for several years been in deplorable conditions.

According to Alebtong District Engineer Mr. Emanuel Steven Obua, work on the the 12km road began this week with a launch at Amononeno parish, Abako Sub County. The Alebtong Woman Member of Parliament Hon. Christine Acen Ayoo said as leaders they have been lobbying and ensure that status or roads are improved. The District Chairperson Mr. Denis Johnson Okello said after the roads have been worked on, they will ensure they are maintained while the Resident District Commissioner Josephine Omara Olili appealed to LC1 Chairpersons to do monitoring of the roads to make sure that people do not misuse them.

Abako to Opunu market road will be worked on using 68 million shilling from District Road Fund for this financial year.