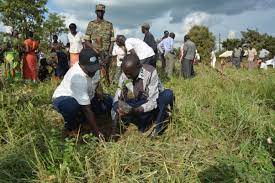 Local leaders in Alebtong district want residents encroaching on wetlands to have their views included in laws on wetlands.

This, they say is after residents have deliberately failed to heed to directives against wetlands by using them as gardens.

Patrick Opaka, the Local Council 2 Chairperson of Awiteck ward, Aloi Town Council said even after passing the by-laws, most residents of Inyero-iye, Aloi Kona, Okuro and Omio all in Aloi Town Council are adamant to leave their habit with reasons that they do not alternative sources of income and food unless government provide. He adds that they now want to engage the farmers such that they can use the wetlands in a sustainable manner to mitigate the effects of climate change.