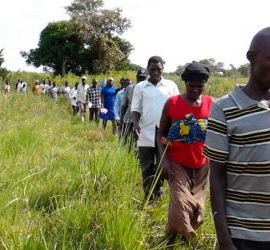 Residents Of Omito During The Land Meeting

Tensions flared high among the residents of Omito Parish, Lira Sub County in Lira district after reports claimed they were mere squatters on a land whose land lord has returned to claim.

The claimant of the land, Abdalla Combe Ananga, believed to be one of the henchmen of the former late President Idi Amin Dada reportedly went into exile during the overthrow of the military government but last week approached the office of the Resident District Commissioner with claims to regain his land he said he left 40 years ago at Telela village in Omito Parish.

The RDC Robert Abak reportedly assigned Micheal Orech, the Community Liaison Officer of Lira to convene a meeting on Saturday with the residents whom Abdalla say are occupying his land.

Abdalla now in his 80s informed the meeting that he owned the land that was surveyed before he went into exile in Kenya but amused the people when he said he left his land in the hands of God.

However, the residents could not contain the claim by the aged Abdalla and threatened to lynch him if he insisted in evicting them. Others said the presence of Mzee Abdalla reminds them of the dreaded State Research Bureau, the military intelligence by then, although RadioWa could not independently verify whether Abdalla did serve under the unit.

But Michael Orech,the Community Liaison Officer warned the residents against taking the law in their hands but to look for amicable ways of solving the problem.

The meeting that ended prematurely attracted more than five villages in Omito parish which included Telela A and B, Akitenino, Bung, and Adelokok.