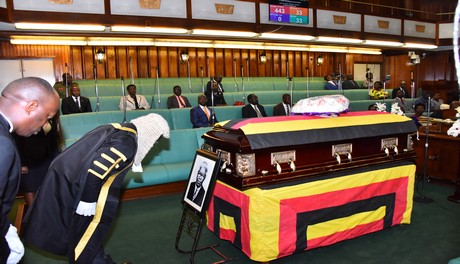 Thousands of mourners on Sunday gathered at the ancestral home of the late Presidential Commissioner of the then Uganda Military Commission led government Mzee Joel Hunter Wacha Olwol.

President Yoweri Kaguta Museveni who was in the then a member of the Military Commission, was the chief mourner.

Earlier, speaker after speaker eulogized the late as one of the most hard working and dedicated Ugandans who prepared the path for Uganda’s independence from the British colonization.

Mama Miria Obote, the former First Lady and UPC party president implored the youths to emulate the character of the late Wacha Olwol to ensure they provide good services for the development of the country.

Hon. Jonathan Odur the Erute South area member of Parliament asked the government to provide a memorial monument in recognition for the great work done by the late Wacha Olwol. He suggested that government establishes a vocational school in Amac Sub county in memory of the former head of state.

Betty Amongi, the Minister for Lands, Housing and Urban Development expressed her pride that of all the three presidential commissioners who led Uganda during the transition from the Military Commission to the second UPC government, it was only Mzee Wacha Olwol who was honoured with a state burial.

The Lango Paramount Chief, Won Nyaci His Highness Mzee Yosam Odur Ebii spoke of how he got to know Wacha Olwol when he would spend his night at his place while on his way to school in Masindi.

Meanwhile, immediately on his arrival for the burial at about 2:PM, President Museveni proceeded to address the mourners after briefly greeting some of the dignitaries that had assembled at the burial ground.

In his speech, the President directed the permanent secretaries from the Ministry of Public Service and that of the Office of the President to speed up the process of paying all the emoluments due to the late Mzee Joel Hunter Wacha Olwol for his service as a Presidential Commissioner.

He described Mzee Wacha Olwol as a peacemaker he had loved to meet and work with.

Although the late Wacha Olwol had in his will that he be buried next to the grave of his late father Rwot Erieza Olwol, the clan of Okii me Okabo instead buried the former clan leader next to the graves of his two wives and other family members.

Among some senior opposition politicians for the burial were the President General of the Democratic Party Norbert Mao and former UPC President Ambassador Dr. Olara Otunu among others.