Radio Wa 89.8 is located in Lira, in the heart of Lango sub-region.

Most of the inhabitants of this sub-region belong to the Lango ethnic group.
The Langi (often referred to as Lango, which is actually the name of their language. Lango also refers to a singular person; Lango person, Langi people) live in Lango sub-region (politically Northern Region, but geographically central Uganda), north of Lake Kyoga. Lango Sub-region comprises the districts of Amolatar, Alebtong, Apac, Dokolo,Kole, Lira and Oyam. The Lango population is about 1.5 million according to the 2002 population census.

Lango language is a Luo language, a sub-group of the Nilo-Saharan languages, and mutually intelligible with Acholi and Kumam, and related to other Luo languages of Uganda and Kenya.

The Langi tribal symbol is the rhino.
Langi speak a Western Nilotic (Luo) language like their northern Acholi and Alur neighbours, but share many cultural characteristics with their Ateker (Eastern Nilotic) neighbours to the east.
Some anthropologists assert that they are part of a group that migrated from Ethiopia around 1600 A.D. and split into two groups, with one groups moving to present day Kenya to form the Kalenjin group and Maasai cluster. The other groups, called Ateker, migrated westwards and entered Uganda from the north-east. Ateker further split into four groups to form the Karamojong, Iteso, Kumam and Langi. The Langi migrated further to the west, and there they encountered the Acholi, who they pushed northwards from the northern part of Lake Kyoga. Through prolonged interaction with the Acholi, Langi lost Ateker language and took up Luo spoken by their Acholi neighbours. Many Langi identify with the Luo, refuting the theory that they are Ateker. 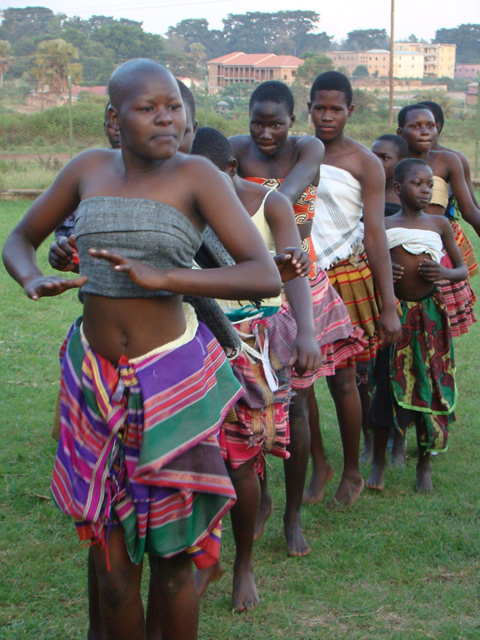 Lango have often been victims of the volatile politics of Uganda. The first Ugandan prime minister and two time president, Milton Obote, was a Lango. During the 1970s, state inspired violence by the Government of Idi Amin was used to decimate the elite of the Lango and their neighbours the Acholi.

The 19-year rebellion against the government of Uganda by the Lord’s Resistance Army (LRA) is behind a massive population displacement in the region. Rebels continue to attack camps for displaced people, burn homes, loot, abduct children, rape and kill, in a brutal campaign of violence.

One of the bloodiest events that ever took place in this region was a massacre in which over 300 people were cold-bloodedly killed by LRA rebels in a single day (21st February 2004) in a village called Barlonyo (26 Km North of Lira).

The Langi people, are the final group westwards, of migration from Abyssinia (Ethiopia) which dates back to 1600AD. According to tradition, the Jie now known as the Karamojong, are said to have migrated from an area known as Ararat in Abyssinia between 1600 and 1700AD as a single group which was then known as the Jie, before using the phrase; “Ekar ngimojong” meaning the old can walk no farther; which eventually gave them the name Karamojong.

A second group known as the Toposa moved straight forward and settled in an area within the territory of the present day Sudan. The third group the Dodoth settled at Apule in the northern part of the territory now known as karamoja. The main group moved southwards. On reaching the territory now occupied by the Jie, the group are reported to have fragmented into three groups.

The Jie, remained where they were. The three groups which emerged, were said to be the Pian, Bokora,and the Matheniko. These three groups moved farther southwards and the third group from the three went westwards and formed the Iteso, Kumam, and the Langi.

It was this last groups, the Pian, Matheniko, and the Bokora, who travelled the farthest who are said to have used the phrase “Ekar ingmojong”,” meaning the old can walk no farther”, from which the name now known as the Karamojong derived. The Pian, the Bokora and the Matheniko still live within the territory now known as Karamoja.

But the Iteso, though linguistically intelligible with their neighbouring ancestor, the (Karamojong) and share many traditional practices, now live in a separate territory, known as Teso (Soroti).

The Kumam, the smallest of the entire groups, settled in a small area known as Kaberamaido located between the Langi and the Iteso territories. Kumam people speaks Luo oriented dialect which can be understood by the neighbouring Langi people with the least amount of effort. But they still use some words from the Iteso.

The Langi moved farther west and encountered the Luo whom they pushed northwards and finally settled in the central area of the present day Uganda, along the Nile tributory: Lake Kyoga and Lake Kwania in an area now known as Lira and Apac. The Langi encounters with the Luo are recorded in a rare prehistoric Acholi war song known as “Otole”.