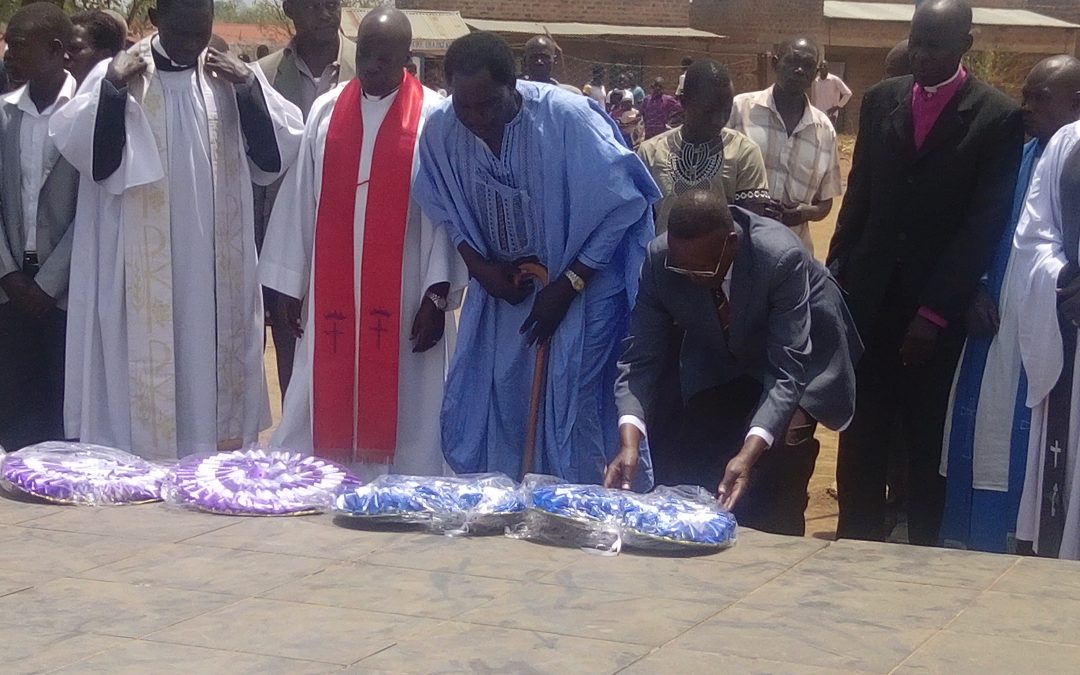 (by Sam Ogwal Alero)(picture: Hon Kamuntu in suit with other leaders laying wreath)

Former Lands, Housing and Urban Development Minister Hon. Daniel Omara Atubo has urged the people of Lango not to forget the annual memorial prayers for civilians massacred by LRA rebels at Barlonyo in 2004 He said the Genesis of the celebration was to continuously remember Barlonyo as a “symbol of bad governance, of war which (we) reject, and of abuse of human rights and dignity”.

The former legislator was reacting to the concern by Erute North MP Hon. Charles Angiro Gutumoi in whose constituency Barlonyo is found who was not impressed by the lack of participation by top leaders in the region during this years memorial prayer. The commemoration prayers for this year took place on Thursday 21st February 2019 and was also expected to be attended by leaders at various levels. The Minister of Tourism, Wildlife and Antiquities Dr. Ephraim Kamuntu who represented the Prime Minister as the government envoy at the event, promised to develop the massacre site as a tourism destination in the region.

But, according to Angiro, top local leaders in Lango like Resident District Commissioners, District Chairpersons, other political and cultural leaders did not show up in solidarity with the community of Barlonyo. Asked for comments, Dr. Richard Nam, the Prime Minister for Lango Cultural Foundation said the Paramount Chief Mzee Yosam Odur and himself did not attend the commemoration prayer because it coincided with Kings’ forum in Kampala. He promised that Lango cultural institution will take the lead in preparing for the day starting next year.

More than 300 civilians are believed to have been massacred by the LRA rebels that attacked Barlonyo Internally Displaced People’s camp on February 21, 2004.