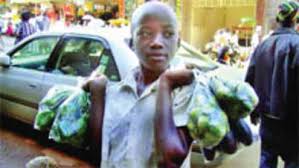 The streets of of Northern Uganda’s Lira City and the rural areas of Lango Sub region shall continue to witness a number of young school going age children as market vendors.

Soon after the lock down over Corona Virus was announced by President Yoweri Museveni in March 2020, many of the pupils supported by their parents and benefactors took to the streets and rural markets to vend among others boiled eggs, roasted ground nuts and cassava.

According to the recent release by the Ministry of Education, Primary Four and Five classes will study for eight weeks starting on April 6 after Primary Leaving Examinations and end on June 4 to create space for lower primary pupils in Primary 1, 2, and 3 to come in on June 7.

But to her, a ten year old pupil from Kirombe in Lira City West whose name and school has been kept anonymous says she is uncertain of returning to school. She currently sells tomatoes, green pepper and onions to raise money that is supporting her sick mother.

Another 12 years old boy residing in Aloi who sells boiled eggs, said he does the work on the orders of his step mother after losing his biological mother. He is among the children to return to school.

Okello David Okeng, the co-coordinator for Communication For Development Foundation Uganda (CDFU) based in the districts of Apac, Kwania and Kole have meanwhile appealed to the parents not to expose their children to abuses through vending.

He said the vending exposes them to defilement, torture and drug addiction among others leading them to contract diseases like HIV/AIDS and STD’s .