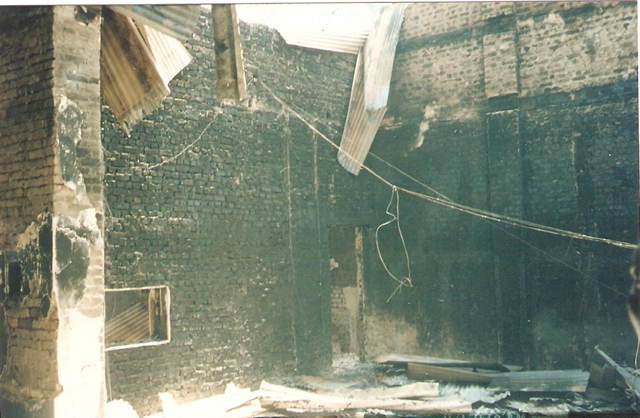 Interior View of The Damaged Studio

For the last twenty years, the region of Northern Uganda has been affected by the criminal activities of the Lord’s Resistance Army (LRA), an armed group led by a visionary called Joseph Kony that has created a fierce militia with no clear political agenda which has terrorised the region attacking villages, destroying crops, killing and maiming innocent civilians and displacing more than 500.000 persons as well as abducting thousands of children to be used as sexual slaves or child soldiers.

Radio Wa, being an active participant in the struggle for peace in Northern Uganda, was not spared the wrath of the rebel group. On the first hours of 27th September 2002, the LRA rebels attacked and burnt the premises of Radio Wa, which were then located at the Parish Hall of St. Peter Claver Catholic Parish in Ngetta.

Thanks to a summary of the report submitted to MP Hon. John Odit and some other regional parlamentarians and the testimony of some people who witnessed the attack, we can provide here a first-hand chronology of events surrounding the attack to the radio:

Ngetta Hill is the heart of the Catholics in Lira, it is the Mother Church of the diocese whereby the first missionaries put their feet in 1931. Taking advantage of the premises of old church building of Ngetta Parish, Radio Wa started there its media activities in January 2001.

In June 2002 the LRA insurgency escalated in Lango sub-region and since that moment Radio Wa, like any other institution in Ngetta started being threatened. On many occasions unclassified and anonymous calls were made to presenters of Radio Wa bearing threats.

On the 23th August 2002 the level of insecurity intensified and the management of Radio Wa made a move by bringing UPDF soldiers for temporary protection. From 22nd to 24th September LRA threats overwhelmed the leaders of the area as they would often be woken up by concerned neighbours/villagers fearing that rebels could attack Ngetta Hill at any time. Reports showed that in these days the rebels reached Aler (5.5 Km from Ngetta), though they never reached Ngetta. On 24th September at 4.00 AM burning of houses was reported in Akor, 4 Km East of Ngetta.

Due to the deteriorating security situation, representatives of different institutions met with the Resident District Commissioner in Lira, Mr. Egou Engwau, who assured enough protection to civilians and institutions.

The District Internal Security Officer (DISO) was contacted and he requested to Fr. Sebhat Ayele not to close the radio, since he was sending a military contingent commanded by a Major. At 4.30 PM Fr. Sebhat called the Major asking about what to do with the radio because all civilians were escaping from Ngetta. The Major promised that he would provide enough security and insisted that the radio should not be closed. In the meantime, Fr. Sebhat was getting a lot of pressure from the Bishop of Lira and by the Director of Radio Wa (both happened to be in Kampala on that day) to dismantle and to transfer the equipments to Lira Cathedral if there was no security on the ground.

Since no security personnel had arrived at the station by 18.00 hours, Fr. Sebhat called again the Major informing him about the instructions given to him by the Bishop and the Director of Radio Wa. The Major objected the proposal and promised to be in Ngetta in half an hour. At 07.00 PM, since no security had been given by then, Fr. Sebhat ordered the closure of Radio Wa. At 08.00 PM Radio Wa was reopened as the long awaited soldiers (20 in number) and two armoured vehicles arrived at Ngetta Hill.

On 25th – 26th September 2002 the rebels were still in the vicinity of Ngetta Hill. The armoured vehicles were no longer available and only a few soldiers remained to monitor the security. On the area there were intense rumours that the rebels were seriously targeting Ngetta Hill in general and Radio Wa in particular.

On 26th September at 11.00 PM the management of Radio Wa and other concerned people had rung the Resident District Commissioner (RDC) and other security officers informing them about the movements of rebels advancing towards Ngetta Hill. This information had even been broadcast live by Radio Wa at around 10.30 PM, but the security was not reinforced. As there was no enough security, Radio Wa closed down its broadcast at midnight. It was too late to transfer any equipment.

On 27th September at 05.10 AM the LRA rebels attacked Ngetta Hill and Radio Wa from three different directions. They caused colossal damages and wanton destruction, burning the building were the radio had its studios and offices. Despite the repeated pleas from representatives and institutions, around Ngetta there was neither sufficient number of soldiers nor armoured vehicles to repel the attack. On that night only 12 soldiers were sent to patrol the entire area of Ngetta Hill. 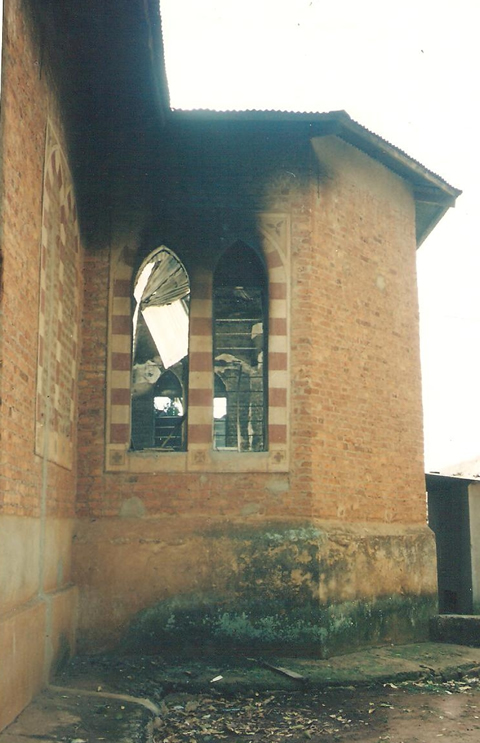 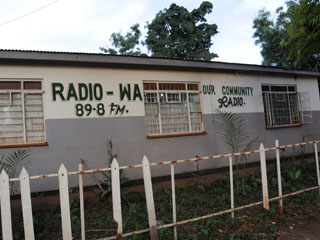 The burning of the radio station had as a consequence the destruction of the radio transmission system, office fittings, documents and music system. The estimated total financial loss incurred is 112,000 US$.

Fortunately, none of the Radio Wa staff was killed during the action. Some of them, as well as many of the citizens around Ngetta Hill, had to deal with post-traumatic stress as a result of the physical dangers they were exposed to.

People in general were very frustrated at the fact that security officials failed to provide protection when it was justifiably requested. Military personnel and armoured vehicles reached the site one hour after the incident and yet, they were nowhere to be seen when it happened.

Despite the massive destruction of valuable equipment, building and files, Radio Wa managed to emerge again. Requests were made to sympathetic groups, organisations and individuals who would be in the position of contributing to the reconstruction of the radio. Many individuals from the Lango sub-region showed their solidarity by supporting the reconstruction of Radio Wa with the meagre resources they could afford. The destruction of most of the technical equipment by those who promoted violence and terrorised innocent civilians in the region did not break the will of those involved in it. This sad event only reinforced the commitment of Radio Wa 89.8 to keep working for peace, harmony and development.

It was only 6 months after the destruction that Radio Wa managed to restart its regular broadcasts, but in this new period it had to be hosted in a safer place where it would not be easily the target of rebel groups. Thanks to the kindness of Fr. Carlo Ojuka, Parish Priest of Lira Cathedral, the radio premises could “provisionally” be put up 5 rooms belonging to the Cathedral Parish Hall. Radio Wa has operated there ever since, in the hope that in the near future it might be able to afford the construction of a new building more suitable to its needs.