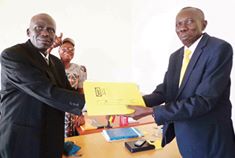 The new Resident District Commissioner of Lira, Milton Odongo has called on all criminals especially the corrupt government officials to report to their religious leaders in churches and mosques to repent. He called upon the public to report corruption cases with enough evidence for prosecution to address the vice which he said undermines development and makes people hate the government.

Odongo was on 24th October 2018 taking over office from Robert Abak who was transferred back to Otuke where he had served as the RDC for two years before his transfer to Lira. Odongo said he has been following reports about corruption scandals in Lira especially in the Municipal Council from the media and warned saying, “these practices must stop forthwith [sic], those who refuse to repent will be caught by the law”.

The new RDC whose reappointment and posting to Lira by President Museveni shocked many NRM cadres in Lango said he was aware of a plot to tarnish his name by luring him with money.

“I have been fully informed and briefed about some elements who are prepared to compromise and trap me as the new RDC Lira with money, free gifts, fuel etc to tarnish my image. I already know you, I don’t need your money etc. Am a peasant RDC who is not very poor”.

Odongo who previously served as the Deputy RDC of Gulu and later the substantive RDC of Kasese and Amuru before being dropped said the President trusted him as a tested cadre to serve the people of Lira.