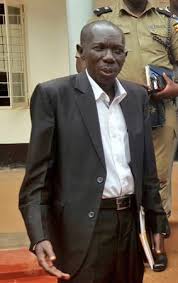 Construction work on Ogwete Health Centre II in Olilim Sub county, Otuke District has began following plans to have the facility upgraded to Health Centre III. The project which include construction of a General and a Female ward was handed over to Otada Construction Company Limited at a tune of 500 million Uganda Shillings. The company will work within three months allocated for the project to be completed.

The handover ceremony on Monday was attended by the Otuke Resident District Commissioner, Robert Abak (pictured), the District Chairperson Bosco Odongo Obote and the Chief Administration Officer Joshua Mambiya among others.

Speaking to Radio Wa after the handover, RDC Robert Abak said he warned the contractor against shoddy and to ensure that there will be value for money. He says after the construction work on Ogwete Health Centre and the elevation of its status to Health Centre III, the health service delivery in the Sub-county is expected to improve tremendously.