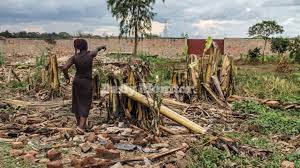 The parents in Apala ‘B’ cell in Juma parish Kamdini Sub-county, Oyam district are worried about the education of their children whose school is entangled under a land conflict.

For about two weeks after the reopening of the schools on Monday 10th January after nearly two years of closure due to Covid 19, only 636 pupils out of the total enrollment of 1300 have returned for classes at Apala ‘B’ Primary School. The Chairman School Management Committee, Bonny Ogwang attributes the low turn up to the escalating land dispute and the insecurity it poses to the school community and the surrounding villages.

According to its first headteacher Richard Olia, the school land that measures approximately 18 to 20 acres was offered by the four households of Zekaria Otwon, John Bua, Charles Owani and Awio Obiny in 1989 for a Sub-grade school before government took over in 1991. He says the current conflict is largely being influenced by namely; Sam Okwir, Owini Coo-Too, Francis Ongom and Ronald Ongora whom he said have gone to the extend of planting banana stems on the school compound and teachers’ gardens. He appealed to the Oyam District Education department, the RDC, and Kamdini Sub-county authorities to intervene against what he said, the act of ignorance of some people to deny education to children by engaging in land conflict with the school.

But, Francis Ongom and group claim that they left the land in conflict during the LRA insurgency and on return, they found the land already with the school infrastructure.