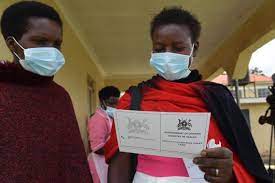 The Resident District Commissioner RDC of Oyam has expressed concerns over reports that some teachers were not responding to the calls for their massive vaccination against Covid-19.

The success of the vaccination of all the teachers is seen as one of the benchmarks for the reopening of the schools.

Gillian Akullo who was speaking during the opening of St. Mary Immaculate Conception Loro Catholic Parish in Oyam district said, those who will deliberately refuse to get vaccinated should not regret later if tougher move is taken on them.

Although she did not mention the tough measures, most of the authorities in Lango Sub region have threatened that any teacher who misses out of the vaccination risk losing their jobs.