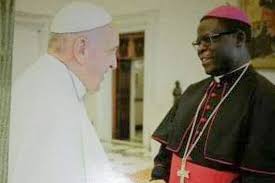 Pope Francis has appointed Rt. Rev. Sanctus Linos Wanok as the new bishop for the Diocese of Lira. The announcement embargoed until 2pm November 23rd was read on Radio Wa 89.8 FM by Rt. Rev Joseph Franzelli who now becomes the Apostolic Administrator of the Diocese until the canonical possession by the new Bishop.

The appointment of Bishop Sanctus Lino Wanok who has been the Bishop of Nebbi Diocese since 2011, follows the resignation of Rt. Rev. Joseph Franzelli that was accepted by the Holy Father, Pope Francis. Rev. Fr. Alfred Rayan D´Souza the Charge d’ Affairs of the Apostolic Nunciature in Uganda wrote thanking the Lord for the dedicated services Bishop Franzelli has rendered to the Church in Lira and Uganda and to Bishop Santus Wanok, his best wishes for the new responsibility.