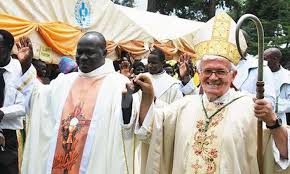 President Museveni has pledged huge support towards organising the Golden Jubilee for Lira Diocese and the redevelopment of  Uganda Martyrs Lira Cathedral Church.The President made the promise on Monday 14th August in a meeting with the Lango Community Association delegation at State House Entebbe.

According to Mr. Ben Ogwang Ocho, the  Senior Presidential Adviser for Lango who attended the meeting, the president  promised to give money and also send UPDF engineers whose work has been so impressive, to carry out the renovation work on the cathedral.The request he said was table before president by Bishop of Lira Diocese Rt. Rev. Joseph Franzelli who was also in attendance.

The pledges are said to be for both organising celebration of the Lira Diocese 50th anniversary in 2018 and for renovation of the church work.Lira Diocese was curved from Gulu Diocese and officially began on the 12 th of July 1968.In that meeting, Ogwang said the president also asked believers to giving their support toward improving the Catholic Church.

On the other hand, the president has contributed 10 million shillings towards the burial of the late Mzee Joseph Orombi Okello, a staunch laity who also served in various political offices in Lira Municipal Council.He passed on Saturday 12 th August, 2017 at Atapara Hospital and was laid to rest on Thursday 17th at Adyel in Lira Municipality.