The Journey of Fr. James John Fraser in Uganda. 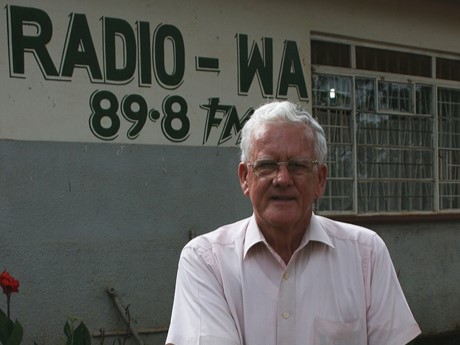 After being ordained priest in April 1960, Fr. James John Fraser spent his last months at Urban University, Rome, studying Luo in preparation for his trip in Uganda.

He came to Uganda in 1960 as a young priest and was sent in Kalongo mission to polish his Luo. In 1962, he was teaching at Lacor Seminary and Layibi College in Gulu. In 1966, Fr. John Fraser went to Aduku Parish in the then Lango district as a Parish Priest. After three years, he went back in England as Rector of Mirfield Seminary.

While there, he raised funds to build Lira Cathedral. But soon Uganda kept beckoning. Fr. John came back to Uganda. His adventurous spirit led him to teach at Moroto High School. In Moroto, he was the designated football referee for matches between Police and Army. The two sides often ended up shooting each other in the streets after a match unless there was a stern referee.

He was later sent to Alenga, Apac District as a Parish Priest where he spent 15 years. He was among those who opened the first maize mill and first fishermen’s cooperative society in the area.

Fr. John Fraser left for Canada and later the US to work with media projects. His next mission was Malawi, where he did not stay for long.

After reading about the continued brutality in the Northern Uganda, he left his life as the National Director of the Pontifical Missionary Societies in Canda to come to and contribute towards ending their suffering. He then opened Radio Wa in 2002 to boost dialogue in ending the 18-yuear-old war. Radio Wa in Lira is a community radio that preaches peace and reconciliation.

Through its Karibu programme, run by then, the famous DJ Kakaba, Radio Wa contributed to the surrender of over 1, 000 former abducted children and rebel commanders in 2004, according to the Uganda’s government army, the Uganda People’s Defence Forces -UPDF. Fr. John Fraser later open the first television station in the north to preach forgiveness.

Fr. John was born in a family of people paying allegiance to different religious beliefs. Two Jews, a Protestant and a Catholic. He told me, while growing up, he  learnt to respect other people’s beliefs. But his travels are what taught him the art of living harmoniously with people.

Fr. John Fraser died unexpectedly from Cumbrae House Care Home on  Burnbank Terrace in Central Glasgow at around 3:00am, in the early hours of 19th December, 2022 – Tuesday morning. According to Fr. Javier Alvarado, Fr. John Fraser had contracted a chest infection over recent days and was attended to by his General Practitioner, Doctor Ho. However, his condition suddenly deteriorated late on Monday evening and he died peacefully in the night.

As Radio Wa and Catholic family we remember for his humility, patience and proactiveness. For him, life means love, benevolence and service.