Lock Down Brings Down Charcoal Burning In Otuke District 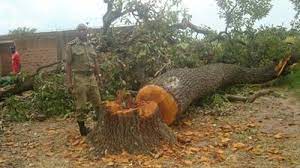 Charcoal burning in Otuke District has drastically reduced during the lock down period associated with the inter-district travel ban. The ban which is part of the Presidential directives to curb the spread of Covid-19 was announced on 18th June.

Christopher Omara, the Otuke Resident District Commissioner confirmed the decline in the charcoal trade that mainly targets the cutting down of the region’s Shea nut trees known for the expensive oil products. He advised the locals to look for other alternative sources of revenue during and after the lock down.

Martin Achai, the LC 2 Chairperson of Ating parish, Orum Sub county said he has stopped the locals of the area from cutting trees for charcoal burning. However, Geofrey Abuka, the parish chief of Okwongo Town Council says charcoal burning is no longer a major activity there since most of the trees have since been cut down.