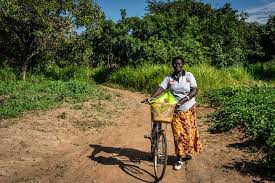 Residents of Ogwete Sub-county in Otuke district have all the reasons to congratulate themselves after their self help initiative to work on their community access road became successful.

The locals decided to come together to work on the access road that connects the Sub-county headquarters to Ogwete Health Centre which they said was in poor state and dangerous to the lives of patients.

However, Bosco Odongo, a resident of Ogwete parish said that the Sub-county still has many impassable access roads, urging government to provide them with murrum and culverts for the bridges to back up their self help initiatives. Samuel Otim, a resident of Bari-bunga village in Ogwete parish said after experiencing a number of accidents on the access roads, they undertook to use hoes, pangas among other local equipments to work on the roads.

The LC 2 of Ogwete parish Moses Ogwal applauded the residents for taking such a brave step by not leaving it upon the government to help improve on the roads.

Meanwhile, the LC 3 of Ogwete Sub-county Peter Okweda, confirmed that the residents sought permission from him to work on the roads although it is the responsibility of the local government.