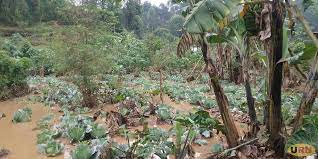 The rains that many prayed for to be a relieve after a long dry spell in the last season has changed its state in Ating parish, Orum Sub county in Otuke district where hailstorm and strong winds caused massive destruction.

Angelo Opio, the LC1 Chairperson of Pokene village said crops like Beans, soya and simsim including some houses were destroyed by the rains. He called upon government to provide the affected residents with fast growing crop seeds to address the crisis.

One of the victims, Evalyn Okello of Opoo-keni village says she has been left homeless after her houses was destroyed and leaving her into the hands of any merciful people.

Innocent Ojuka, the LC1 Chairperson of Olai-imoko village is worried of famine as many people have lost their crops to the rains.